Many times, the Guild of Jewish Folk Craftsmen introduce the names of new artists and artisans. When a new member appears in our guild, the member gets a chance for a solo exhibition in our known venue, which is Kings Bay Library. And this time – this is a young artist, Alexander Portnyagin. The theme is his drawings is nice and easy to percept. Just cityscapes and some of the remarkable moments of his life. However, he draws it in a very certain and colorful manner, displaying the places seen my millions in a very colorful way. That’s a gen of his drawings. 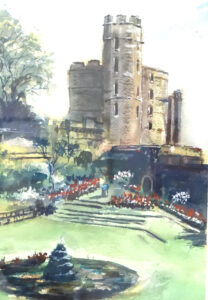 The pictures drawn by Alex, depict the most known places in the most fabulous cities of the world. For example – the panorama of the Old Town in Prague, Windsor Castle near London, picturesque town of Italy with its uniqueness, everyone’s favorite Venice, ever-changing New York, and many more. Alex also draws more ordinary places like parks, streets, markets, etc. Look how he chooses colors to draw something. Seems like it’s his main tool. For example, look how contrast does one of avenue in New York looks. On a foreground we see gloomy brownstone buildings, on a background dark grey skyscraper. It’s dusk, but the street is full of orange lights from car’s headlights, from streetlights, and pay attention to some blue spots over the roofs of buildings. Maybe he means the snow by it. 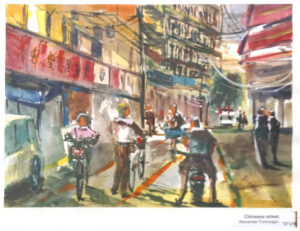 Look how colorful is Chinese market. And the most amazing things is that Alex draws everything from reality. Unlike other artists he does not invent the objects of drawings by himself. He draws life as it is, just bringing more contrast. It’s impossible to depict all of his paintings in words. How beautifully orange are the sunsets, how green are the parks and fields, how blue are the lakes and sees. Just come and see.
As Nina Tsypina, the curator of the expo pointed “..Even though Alex in young, and kind of new artist (he started to draw two years ago) he chose watercolor…”. As expert member of the guild she states that “…this is tough genre of drawing unlike acrylics. He has very intuitive and very creative approach both in choosing what to draw and in drawing …” He doesn’t plan anything, he finds what to draw from photos, and from own memories. Many of his paintings are Italian based. Why, because he visited Italy a few times, and felt the taste of that country. 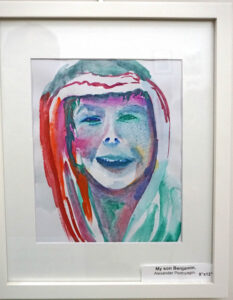 Alex does not only draw landscapes. Look on a colorful portrait of his son Benny. All his face is in multiple colors. Seems like all the nature all the world reflects in him. As of my personal perception – I’d think Benny is in a recording studio, during an action, maybe pretending himself a spaceman, or watching an action at least. But as Alex told as – Benny was pictured just after taking a shower. I believe the artist just caught a moment to see his son happy and added all the colors to depict those feelings. By the way Alex brought his family to the presentation. His son appears as very educated and bright young adult with multiple talents, such as videographing, singing, and even some public speaking. Alex’s wife Alyona gives him inspiration to draw and be creative. 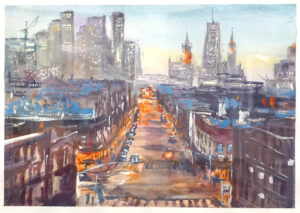 Alex Portnjagin is an electronic engineer by an education. Today he works as a computer programmer, begin still specialized in electronic microdevices. Why did he choose to be an artist seems mystery, since there is no connection between two of these irrelevant fields on research? Scientists know the answer why: Human brain consists of right hemisphere which responds for scientific abilities, and left half which is for artistic abilities. Just like both of legs, hands, eyes, ears, the hemispheres of brain must receive balanced load. So it’s natural for many people it’s natural to be equally developed in scientific and artistic skills. These are two parallel words that do not interact with each other, so its pretty usual combination. But not every engineer or programmer is such artistic as Alex.
As Alex tells, the reason why he chose watercolors is simple. “…They are much cleaner then acrylic, and other kinds of paint, and since I have no studio – this is the only technique I can allow myself…”
The curator of the expo told us that it was really a pleasure to work and organize as expo with those young people, i.e. Alex, his wife Alyona, and young son Benny.
It was a surprise to find how did Alex started to draw. Believe or not it happened just by accident. Once upon a time, his wife and son left for Texas and Alex tried himself as an artist. They came back and found that hidden talent of their father.