Even though the weather was just fine to spend whole day outdoor, being free of computers, internet, kitchens, and other routines – some of us decided to enter the indoor venue where the most of the JFCGI exhibitions take place. And this time, as usual, we enter the conference room of Kings Bay Library in Brooklyn; and are amazed by the variety of colors, styles, techniques, and depicted objects on the paintings by Yama Kramlich. On a parallel wall, we can see charming, soulful and fond artworks of leather, made by Toma Shaishmelashvili 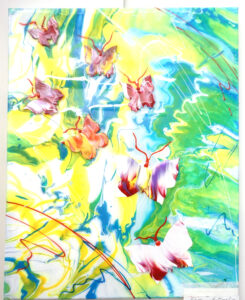 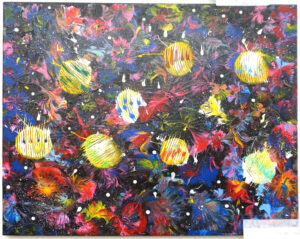 Yana’s works are both abstract, and realistic. But even the things which have real prototypes look rather abstract then real. For example, look on how she drew the trees. In real nature they never appear in such colors as bright orange, bright red, yellow, and even blue. Look how many colors are there in reflections of New York City. You will never see such a reflection of real New York, no matter what time of day you travel. Speaking of abstract drawings – Kaleidospepe looks like structured, yet full of colors, fierce and festive. Fireworks – are festive and fierce in reality, but Yana’s fireworks are even more festive. Looking on blasts of bright color – one can even recall loud bursts followed by random flashes of light from his or her memory. But look on what is between blasts on a dark background, there you will not see a bitter train of smoke emitted by real fireworks when they dim. You will see a fantasy of colors, which are even more fierce. As we know, there are some artists who draw many things by applying gunpowder blasts to the paint, but Yana is not one of them. She did this picture using traditional techniques such as paint and brush and her hands and imagination. 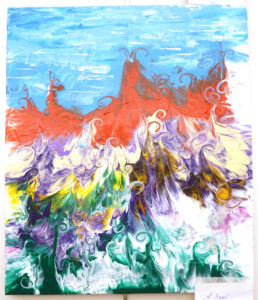 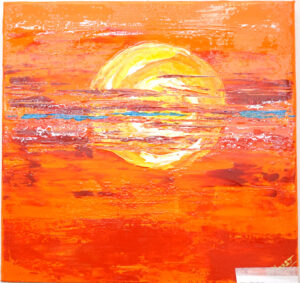 Other works of Yana, which amazed me are flitting butterflier, and sunset. They look glossy since Yana covered them with special vanish. Yana has a crossword drawing, which contains some 3D objects on blue background, which look like beads. But no, they are very carefully placed drops of paint. Exotic things – remind fireworks, but they are rather fierce inside and absolutely peaceful outside unlike fireworks. It’s said they are meteorites, which do not threaten to fall on earth. Even the raging waves, which are drawn in many colors rather then in just blue – do not pose any threat in viewer’s imagination. Just beauty rules over all of the viewer’s feelings. 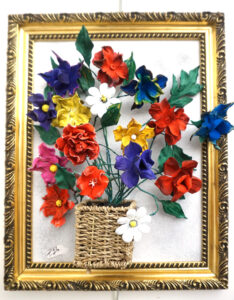 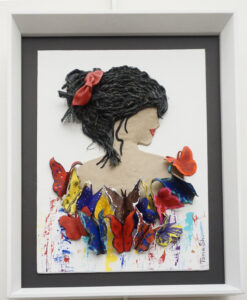 The work of Toma seems like are talking to Yana’s picturesque drawings. Toma’s works are absolutely different. They are also both abstract realistic They are made of painted layers of leather. One work depicts face of woman with her eyes missing, other simply face without nose and eyes. Some depict dancers, some depict woman with butterflies around her. We can say and Toma’s butterflies talk to Yana’s butterflies, but Toma’s work are fond rather than festive. Look on two lily flowers talking to each other. They look like swans on a pond with seagulls above. But they are lilies. Her flower compositions are very high spirited. Some of them are made of (or at least look like) made of dried flowers. And everything looks like living. “…Yana’s nature is searching…” 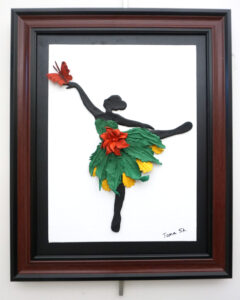 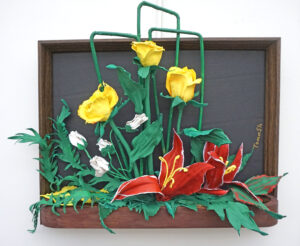 Both of the artists immigrated into USA in the year of 2003. Both of them are self-taught in arts, and both entered the guild in this year.
Yana Kramlich was born in Moscow. Since her father served in military, Yana traveled a lot over Russia. As a result, her education happened in St Petersburg. She finished the institute of Textile and a technologist on textile equipment. This occupation is remote from arts, but visiting factories where this kind of equipment works – she looks on textile arts and textures and was inspired by it. In fact, many of her painting look like goodly designed textile.
Toma was born in Tbilisi, graduated from Polytechnic institute as an Engineer. Even though her education is technical she was and is very fond of arts, loving to draw everything which surrounds her.

Two parallel lines will never cross,
but parallel worlds of art – will.
They exhibit their works on parallel walls
Their creators are on same table
Their works talk to each other,
Even though they look still.
Parallel words, are like sisters and brothers
Without any consent of existence of each other?
But on one of the days – they’ll will!