This time, as I entered our exhibition venue – the conference rooms of Kings Bay Library, I felt something “old and kind” as it’s said in Russian. Maybe an old school stuff, which was crafted by one of the oldtimers of our Jewish Guild of Folk Arts and Crafts. And who are those oldtimers? They are Yakov Kleynerman, his wife Maria Kleynerman and Fira Rasina. 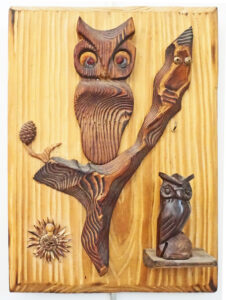 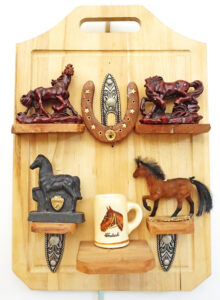 Yakov Kleynerman in known for making crafts out of wood. He uses both wood which comes in branches of fallen trees, and refined wood which comes in sheets. He masters the magic of converting those raw and refined material in finest crafts. Looking on each craft carefully one can recognize the spirit of Jewish settlements. Ones remind the shapes of country houses found in Jewish settlements in Russia, Ukraine, Belarus, etc. Others – look like souvenirs which can be found inside those houses. At one every craft, designed and built by Yakov Kleynerman deserve individual attention, in term of photos graphs, at other hand – it’s wrong to envision each of his crafts separately. They all must be seen together as unite compositions. Guild members shared memories on how Yakov Kleynerman joined the guild, being one of it’s first members. They remembered the festival, which celebrated the anniversary of Russian Community in New York, and Yakov was dressed into Ukirainan national costume exactly as he was on that festival. 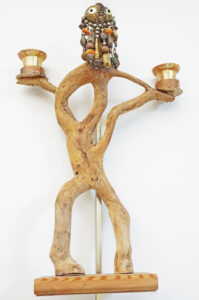 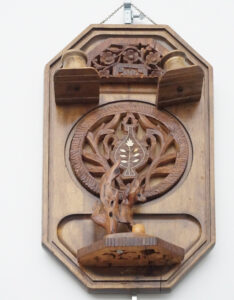 And here comes a colorful painting of entire family of Yakov on that festival. The central object of the background – is World Trade Center, the way it looked before tragedy in 2001. In front of it, there is a park full of greenery and happy family, headed by Yakov Kleynerman. Also, there is a tent which houses all his crafts, he prepared for this festival. 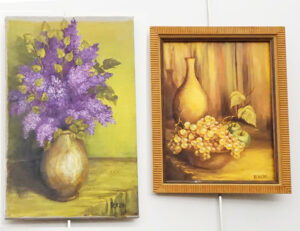 The author of this painting is Fira (Esfir’) Razina, also a hero of this occasion. Fira is one of the oldest members of the guild, she is a very talented artist but unlike most of the guild’s members, she lives in Israel, yet she moved to New York. Mr Kleynerman told about her artworks, he mentioned that since she knows that Yakov loves mushrooms – Fira gave him a painting with mushrooms. Now Fira lives in Israel and paints well. For a life, she does paint of religious meaning, for herself – she drawn everything your can see on the wall. Her moving to Israel – changes the meaning of her paintings. In Israel – she started to draw horses, she started to master the yellow color, the perfect examples are her drawing of fruits, grapes, etc.
No less important hero of the occasion is Maria Kleynerman, Yakov’s wife. Her genre is kind of original rather traditional. She makes crafts our beads with high level of detail. She “redraws” those works in beads, she explained how hard and scrupulous is this process. Guild members say that her achievements are remarkable. Her works are interesting both by color and my composition. “Everyone can see, but only a few can envision what they see” 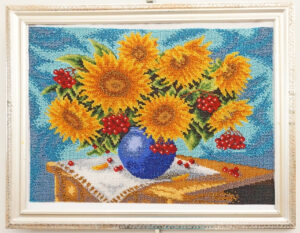 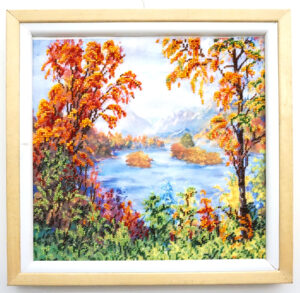 Yakov mentioned that that he married on Marry since 1969. As he said, the wedding happened on a third day after they’ve met each other. And from this moment he acquired a hobby of stone and wooden crafts. Before Yakov lived in Samara, traveled Zhiguli mountain, and organized so called backpackers’ town as a summer retreat for the employees of the engineering institute where he worked, after the Chernobyl’ Trouble in 1986, Yakov moved from Kiev to this area, and found out that his “backpackers town” became more sophisticated camp with wooden buildings, and modern facilities. 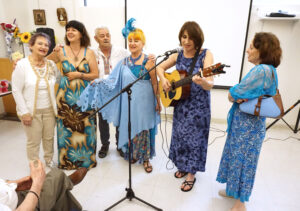 Like previous presentation this once featured the same musical desert. Tatyana Nazarenko danced along with Albinoni Adagio music, together with Inessa Vintskevich, Alla Tetyorkina, and Asya Oranskaja. Later on Inna and Alla gave a concert. Inna sang along with playing guitar, and Alla read her poems. First of Alla’s poem was about her acquittance with an Atlantic Ocean, since it’s her first visit to USA. Another very touching poem of her was about moving from apartment to apartment in Minsk, when you move – and clean the house, old items come up, and walls and ceiling tell you “think before you move”. Then those young ladies switched to the theme of backpacking and tourism, which was mentioned by Yakov. They sang a couple of songs on this topic.

Generally speaking, everything was in harmony: Woodworking, beading, paintings, tourism, family life, poetry, ocean, nature – it’s all about the same. It’s all about what makes us happy and keeps us and running. That’s what are we living for, and the Jewish Guild of Folk Arts and craftsmen supports it.