Zhanna Averbukh, Solo Exhibition
As usual Jewish Guild of Arts and Craftsmen presents in Kings Bay Library on Nostrand avenue in South Brooklyn. This winter day was ordinary with damp and cold weather, but as you enter the conference room of this library for a presentation of the guild – you are immersed in absolutely positive world of arts. 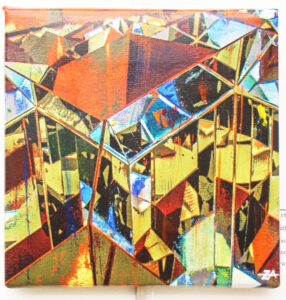 But this his time, I felt like I entered very special atmosphere, maybe even another dimension of our life and imagination. The first thing I saw was a 4 by 4 feet artwork where someone can see buildings, water bodies, patterns which can be treated as stories of a skyscraper. The more you look on these paintings – the more you see that’s an artist obeys geometrical laws very strictly, unlike other abstract artists. The title of the work is “shatter connected”, other works are untitled. 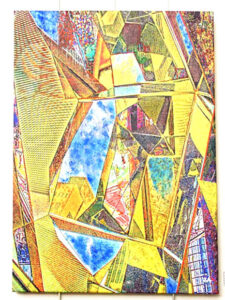 Only the author knows what is it.
As Zhanna Averbukh explains, it’s not simply computer graphics, even generated on a computer. It’s mixed media. These works combine photographs, paintings, she scans them and give a command to a computer to align everything is geometrical array. This is not the only form of her art. Zhana presented her photographs on an expo, as well as her paintings can be described both as realistic and surrealistic. Perfect examples are Tokyo Lights, which show the city in the night, with it’s streets blurred and lights exaggerated. 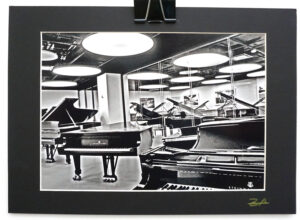 Her photograph “Music and Lights” shows a showroom, of grand pianos. There is a light over each piano, just an ordinary scene. But photographer’s task is not only to take pictures, but also to see something in it, and create titles.
Meanwhile Zhanna shared her biography with us. Her primary education was an electrical engineer, here in USA she learned computer programming, and worked in this field for a while. Like many artists, her drawing talents woke up after her retirement, so she went to Kingsborough College and got another degree in Computer Graphics. Like any student, of any age she faced hardship like strict professors, tight schedule, but nerveless she demonstrated even that she can learn anything which is new and to be the best in it, the toughest professor. I believe that’s an obstinacy which is proper to any computer programmer who never stops working until all the mistakes are fixed and all the issues resolved. By the way, looking on Zhanna’s “Shafters Connected” I recalled the covers, and illustrations in my first college textbooks in computer science. Sometimes cover and graphics are even more important that a book itself. As a student I can say this too, and Zhanna can do it!
Besides Zhanna, other guild members, and invited people like her graphics professors presented their speeches and thoughts about her works. One of the presenters, Zhanna’s classmate gave a very touching and insightful speech. 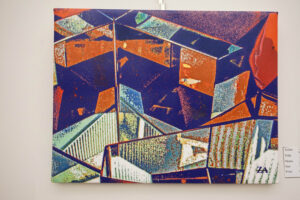 The most important organ on the artist – is a soul or spirit. It dictates the artist what to paint and in what kind. Zhanna has a very artistic spirit, and she is a perfect example that it’s never late to study something new if you soul or spirits tells to do it.