May 27, Jewish Guild of Folk Craftsmen Guild meeting, online.
Meeting in online format by means zoom software – is no longer a wonder of technology, even though it’s still a good substitute of real meetings. But this meeting was still very special.

First of all, May, 2021 marks the 70th Birthday of our President Ilya Nathanson. Let’s celebrate his works and his personality. We recalled his investment to the guild, the way he founded the guild. 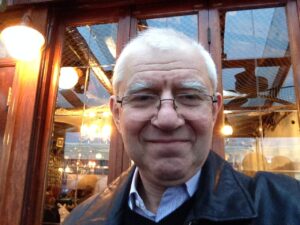 Photographs of guild events in his honor were shown.
He appreciated us for our will to gather online for this celebration in so hard time, and for our third meeting in online format. 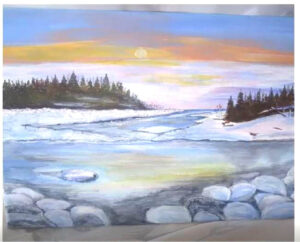 The next presenter was Lyudmila Kaufman, our new member. She displayed her work made of some weird tree roots. On the top of these roots there is something like a goldfish sculptured. She came in USA in the year of 1989 from Gomel, Belarus. Even thought in first immigration years her main concern was work and family, she always thought of doing something creative. Now she has time, she has an out of town house where all the creativity happens. The
The materials are just fallen tree branches around the house. She picked them up before their neighbor could simply burn it. Lyudmila saw the uniqueness of the branches, she imagined it’s a goldfish, and designed it. Her next sculpture of tree branches was a stork, which is considered a national bird of Belarus. Other works, includes Nature Indian face. Then goes the beautiful painting, the autumn in mountains. Paints are bright, sky is blue, it inspired the artist. Next goes the spring. She doesn’t draws from nature, she draws from thoughts. Flowers include poppies, lilac. Then she demonstrated an abstract paintings, called “Egyptian Expepition” inspired by Agatha Christie.
Her next work was inspired by Antuan Exuperee, inspired to write a “little prince” poem. Don’t know how and why, but she was this prince in this poem.
Nina Tsypina, the curator of this even told us, then when Lyudmila was accepted into the guild in 2020, she demonstrated us absolutely difference paintings, so look how her talent and talent in general can be diverse.

The next presenter was – Lidiya Kalinina, her beautiful landscape paintings were shown, but due to technical difficulties we could not hear her, we found out that she is as poet as well, and also her education is – in music. In Tashkent she had no chance to draw, she was busy with her main work. Here in USA she got more free time, and mastered her hidden talent of painting. Her paintings speak for her. 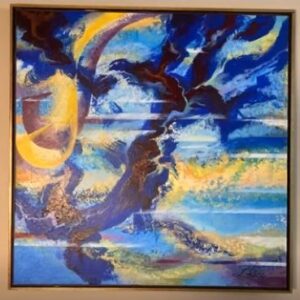 The next presenter was Ludwig Rice, he is a professional artist. The first thing he presented was someone portraits. This picture was called “freedom?” He is 25 years in America, and lives normally like all. He is self-confident, and told that he is not known artist, he is such as is, and his arts must go to such people, who like it. He sales his artworks, and sometime where truly art lover is his viewer, he donates the picture. There was a period he successfully sold some of his picture, and then he lived I Spain for a while.
Every picture he draws is not only an image, he puts some code some message in the picture. If we look on a portrait, the person has a squirrel in his t-shirt- it means he runs he works hard and “rotates as a squirrel in his wheel” (Russian expression for hassle) The man works both on USA and on Belarus, where he is native, instead of seeing a world. His other works include, “passing away” which depicts a horse which is parting with her prior life. Internet, is it good or bad? He demonstrated his burned ceramic work of very expressive man. Then he shoed “Gershwn, rhapsody in blue”. This abstract drawing was inspired by music of George Gershwin. Ludwig feels that realism, ran out of its’ capabilities. Later on, Ludwig demonstrated the sculptures of cyborgs. There is a young man, and young lady. Seems like the young man is still human. He is wearing flowers, he still has face expression, while the young lady is fully faceless, and is capable of just listening to the commands given to her. His last work for the presentation was a portrait of his son. Even though it’s portrait – some symbolics and codes are in the picture. His son lived in Lvov, Ukriane in Israel, and now in New York. He works as cook, and all of this is present in the picture. That’s how real artists paint their artworks.