Simon Shoykhet began his American life in New York in the 70s. He was a young electrical engineer at the time. He passed State Board Exam and was certified for title of “PE Licensed professional engineer” in state New York and Massachusetts. He worked as a consultant engineer in a prominent American corporation and lectured at the NY School of Advanced Engineering. That time he was not engaged in painting, literature, did not play his clarinet. He studied painting later at the” NY School of Visual Art” Passion for travel to amazingly beautiful places of the world, random peculiar meetings on the roads with strangers and their unusual stories are giving birth to images of future paintings on canvases and illustrations of his books. His paintings have been exhibited at various exhibitions in New York and Miami. Many years ago, Isaac VAYNSHELBOYM Valshenboim brought Simon Shoykhet to our guild. Since then, Simon has gladly participated in many exhibitions and events of guild.

His short stories were printed in Russian newspapers and magazines. Since then, 12 of his books have been published in Russian and English by American publishing companies. 9 of them passed the review tests and were approved by the well-known network of Book Stores “BARNES & NOBLE” 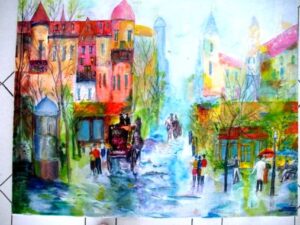